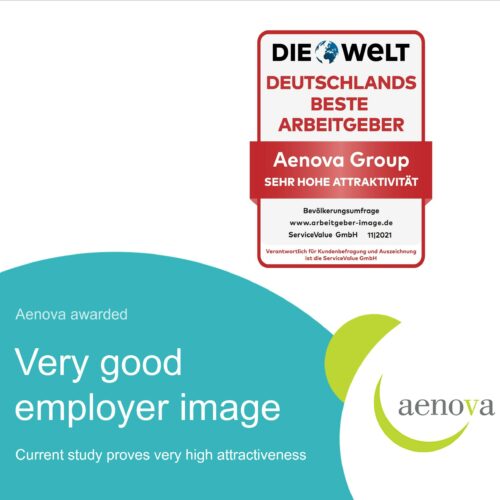 Aenova rated as an employer with "very high attractiveness"

In the study "Germany's Best Employers", Aenova receives the rating "Company with very high attractiveness" in the category "Industry". More than 800,000 citizens in Germany were surveyed about a total of almost 4,000 companies - including Aenova. According to this research, Aenova has an above-average public image. The study results were published at the end of 2021 in the newspaper WELT, among others.

Finding and retaining skilled workers is now crucial to success in numerous industries. When selecting an employer, good and suitable employees no longer focus solely on salary, but also on factors such as development opportunities, sustainability and image. A nationwide study commissioned by the newspaper WELT investigated how companies in Germany are perceived by the public and can thus gain a competitive advantage as an employer. The results of which were published at the end of 2021.

As part of the study, over 800,000 German citizens were surveyed about a total of 3,953 companies from the service, retail and industry sectors. The basis of the population survey on employer attractiveness was the question of personal perception of the image or attractiveness of the employers under investigation. The respondents did not have to be in an employment relationship with the respective companies, but could also take an external view. The investigators' central question to the respondents was: "How do you rate the company's image or attractiveness as an employer?" The evaluation was based on a 5-point response scale from 1 ("excellent") to 5 ("poor"). An unweighted median value was calculated for each company from these values. The results were published in the November 1, 2021 issue of WELT, among others. The study was conducted by the Cologne-based rating and ranking agency ServiceValue GmbH in cooperation with WELT.

The Aenova Group performed very well in the "Industry" category of this survey and received the "Employer with Very High Attractiveness" award, which is the highest rating granted in the study. "How we are perceived by the public as an employer is very important to us," explains Tim Bauer, Senior Vice President Corporate HR at Aenova Group. "The excellent result contributes to all the employer branding issues planned at Aenova in the upcoming months." The management board is also very satisfied. "The impressive result in an independent survey illustrates that Aenova has a high reputation overall in Germany. This is also reflected in personal contacts with customers and partners," comments Jan Kengelbach, CEO of the Aenova Group, on the survey results. "We are very pleased about this award, but we also see it as an encouragement to become even better every day."

The "Germany's Best Employer" seal of approval represents independent proof of quality and promotes awareness and positive perception of the award-winning company.

For more information on the study, please visit